The true story of how Mangalitsas first came to the U.S…. Winfield Farm pigs are descendants from this original herd. 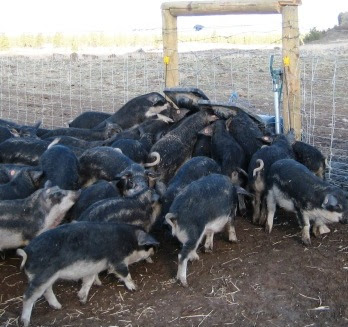 A NEW PIG IN TOWN – story and photo by Heidi Broadhead

Heath Putnam just wanted some tasty pork. And he figured he was not alone.

Mangalitsa pigs, also known as Wollschwein or Wooly pigs (the name that Putnam chose for his business), are native to Hungary. This lard-type breed of pig (i.e., valued for its natural marbling as opposed to American pigs that are bred and fed to be lean) was not available in the United States until last fall, when Putnam imported them from Austria.

Putnam first tasted a Mangalitsa sausage when he was working in Europe. He and his wife and business partner, Zuzana, were repeatedly disappointed by the quality of meat here. They decided to import a small herd of Swallow-Bellied Mangalitsa, a close kin to the wild boar, because they thought this nomadic, foraging pig would be the European breed most likely to thrive in the cold, dry Palouse region of Washington State.

Putnam had never been a farmer, and he had no interest in becoming one. He found a local rancher, Gary Angell of the Rocky Ridge Ranch 30 miles west of Spokane, to raise the pigs. Angell’s area of expertise was forage-raised beef. When he told neighboring farmers about the project, he mostly heard responses like “You’re crazy” and “They’re all gonna die out here.”

Putnam planned to go to Austria with Angell to select and purchase the Mangalitsa pigs. Due to some last-minute health problems, Angell had to stay behind and Putnam went ahead on his own, visiting nine farms and amassing as much information as he could for Angell on how to properly breed, raise and finish the pigs.

He joined the Mangalitsa Breeder’s Association, a group dedicated to reintroducing the breed to Austria (it disappeared temporarily in the 1970s) and to maintaining the quality of the breed. He studied charcuterie with a butcher and got whole-hog tips from a renowned Austrian chef.

“He went over to buy nine pigs,” Angell said. Putnam instead chose to import 29 hogs—two boars and 27 sows, the maximum that could fit in one cargo hold. This allowed him to maximize genetic diversity with three to four lines.

Challenges ensued. After being quarantined in Austria from March to May 2007, Putnam’s Mangalitsas were transported to a quarantine center in upstate New York. From May 12 to August 12, the pigs underwent various tests, delaying their stay long enough for 65 piglets to be born in quarantine (and accruing $1,000 per pig in boarding costs). Wooly Pigs lost 10 piglets on the truck between New York and Spokane. At the ranch, the piglets had a negative reaction to a vet-recommended vaccination and they lost one more.

In November, they slaughtered three piglets for samples and to fill their first restaurant order—from the French Laundry—which revealed the lack of USDA-approved processing facilities in their region that could deal with their special slaughtering needs—like keeping the pigs in a low-stress environment leading up to the slaughter, which is important to Wooly Pigs’ philosophy of humane farming and something that Putnam maintains is crucial to preserving the meat’s flavor.

Tasting the Meat
I visited Rocky Ridge Ranch last November. We sat around the kitchen table—Putnam, Angell, Angell’s wife So and me.

“We are the first four people to try the North American Mangalitsa,” Putnam said as he spooned the three-month-old roasted piglet meat onto our plates. “Not like anything you’ve ever tasted, right?”

The dark meat was so moist it crumbled as soon as the fork touched it. We ate the jowls. We chewed the meat off tiny ribs. We ate soft fat that tasted more like cream or butter. We each had different ways of describing what the meat tasted like, but we all agreed on one thing: This does not taste like pork.

Eating a Mangalitsa is like eating a pig from a hundred years ago. It’s a completely different kind of animal. Since the middle of the 20th century, U.S. pork demand has gone the way of lean—lard was replaced by vegetable oils for cooking, and people began to prefer meatier cuts. Pigs were bred to be lean and to grow very quickly.

Old-style Mangalitsas (what Putnam calls on his website “unimproved breeds”), on the other hand, come from a line that was primarily raised in Hungary, Mangalitsas cross-bred with Serbian wild boars.

“They’ve been behind the Iron Curtain since the ’50s,” said Angell. “Maybe that has something to do with it.”

One look at these near-wild beasts will tell you that this is no ordinary pig. The sows have high, curved backs with coarse gray, black and brown hair on their backs and falling over their eyes. They lift and throw giant rocks with their mud-covered snouts. A couple of them nibbled at the back of my leg, which made me a little nervous after hearing that #5 had recently bit Angell, leaving a pretty nasty bruise. Apparently, as long as I wasn’t a coyote or some other predator trying to get to a piglet, I was safe. (Mangalitsas are very protective mothers.)

And most of the pigs we eat in Washington State come from somewhere else. Although exact consumption data is not available, the Washington Department of Agriculture estimates that 90 to 95 percent of pork consumed here is from out of state, primarily from large producers in the Midwest. (As a comparison: As of December 1, 2007, Washington had 29,000 total hogs and pigs. Iowa, by contrast, had 18.2 million.) Input methods vary, but the predominant feed for pen-raised pigs in the United States is corn and soybean meal.

Mangalitsas are self-sufficient and forage in social groups without needing to be fed or moved from one spot to another, so they are perfectly at home in their 30-acre field. Wooly Pigs raises all their pigs (Mangalitsas and Berkshires) on protein-rich crops in the summer. In the fall and winter, they forage on dry oats, peas, sunflowers, turnips, weeds and grasses. They are finished on hay (alfalfa-barley) and a mix of local grains.

“The quality of fat is amazing,” the Herbfarm’s Executive Chef Keith Luce said of Wooly Pigs’ Berkshires, which are raised on the same diet as the Mangalitsas. “It’s embarrassing, actually. We were taking fat and spreading it on bread like butter.”

Heidi Broadhead is a regular contributor to Amazon’s books blog, Omnivoracious, and is currently writing monster descriptions for the next edition of Beasts! for Fantagraphic Books.